~Cockroaches are insects of the order Blattaria or Blattodea, of which about 30 species out of 4,500 total are associated with human habitats. About four species are well known as pests.[1][2] Among the best-known pest species are the American cockroach, Periplaneta americana, which is about 30 mm (1.2 in) long; the German cockroach, Blattella germanica, about 15 mm (0.59 in) long; the Asian cockroach, Blattella asahinai, also about 15 mm (0.59 in) in length; and the Oriental cockroach, Blatta orientalis, about 25 mm (0.98 in). Tropical cockroaches are often much bigger, and extinct cockroach relatives and 'roachoids' such as the Carboniferous Archimylacris and the Permian Apthoroblattina were not as large as the biggest modern species.

Head of a Periplaneta americana Cockroaches are generally rather large insects. Most species are about the size of a thumbnail, but several species are bigger. The world's heaviest cockroach is the Australian giant burrowing cockroach, which can reach 9 cm (3.5 in) in length and weigh more than 30 g (1.1 oz). Comparable in size is the Central American giant cockroach Blaberus giganteus, which grows to a similar length but is not as heavy. Cockroaches have broad, flattened bodies and relatively small heads. They are generalized insects, with few special adaptations, and may be among the most primitive living neopteran insects. The mouthparts are on the underside of the head and include generalised chewing mandibles. They have large compound eyes, two ocelli, and long, flexible, antennae. The first pair of wings (the tegmina) are tough and protective, lying as a shield on top of the membranous hind wings. All four wings have branching longitudinal veins, and multiple cross-veins. The legs are sturdy, with large coxae and five claws each. The abdomen has ten segments and several cerci. Eggs and egg capsules[edit] Female Periplaneta fuliginosa with ootheca Empty ootheca Female cockroaches are sometimes seen carrying egg cases on the end of their abdomens; the egg case of the German cockroach holds about 30 to 40 long, thin eggs in a case called an ootheca. The egg capsule may take more than five hours to lay and is initially bright white in color. The eggs are hatched from the combined pressure of the hatchlings gulping air. The hatchlings are initially bright white nymphs and continue inflating themselves with air, becoming harder and darker within about four hours. Their transient white stage while hatching and later while molting has led many to claim the existence of albino cockroaches. A female German cockroach carries an egg capsule containing around 40 eggs. She drops the capsule prior to hatching, though live births do occur in rare instances. Development from eggs to adults takes three to four months. Cockroaches live up to a year. The female may produce up to eight egg cases in a lifetime; in favorable conditions, she can produce 300 to 400 offspring. Other species of cockroaches, however, can produce an extremely high number of eggs in a lifetime; in some cases a female needs to be impregnated only once to be able to lay eggs for the rest of her life. Sounds[edit] Aside from the famous hissing noise, some cockroaches (including a species in Florida) will make a chirping noise. 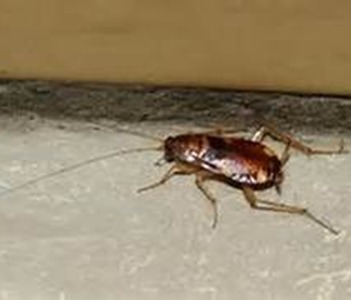 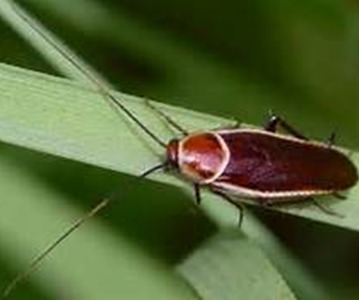 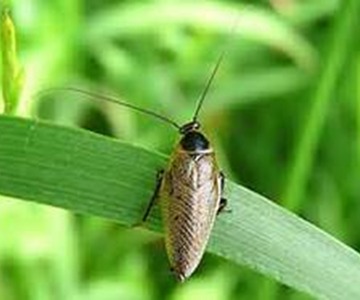