The house mouse (Mus musculus) is a small mammal of the order Rodentia, characteristically having a pointed snout, small rounded ears, and a long naked or almost hairless tail. It is one of the most numerous species of the genus Mus. Although a wild animal, the house mouse mainly lives in association with humans. The house mouse has been domesticated as the pet or fancy mouse, and as the laboratory mouse, which is one of the most important model organisms in biology and medicine. The complete mouse reference genome was sequenced in 2002. It is by far the animal most commonly genetically altered for scientific research.

Characteristics:  house mice have an adult body length (nose to base of tail) of 7.5–10 cm (3.0–3.9 in) and a tail length of 5–10 cm (2.0–3.9 in). The weight is typically 10–25 g (0.4–0.9 oz). In the wild they vary in color from light to dark agouti (light to dark brown) but domesticated fancy mice and laboratory mice are produced in many colors ranging from white to champagne to black.They have short hair and some, but not all, sub-species have a light belly. The ears and tail have little hair. The hind feet are short compared to Apodemus mice, only 15–19 mm (0.59–0.75 in) long; the normal gait is a run with a stride of about 4.5 cm (1.8 in), though they can jump vertically up to 45 cm (18 in). The voice is a high-pitched squeak. House mice thrive under a variety of conditions: they are found in and around homes and commercial structures, as well as in open fields and agricultural lands. New-born males and females can be distinguished on close examination as the anogenital distance in males is approximately double that of the female.  From the age of about 10 days females have five pairs of mammary glands and nipples; males have no nipples. When sexually mature, the most striking and obvious difference is the presence of testicles on the males. These are large compared to the rest of the body and can be retracted into the body.

The tail, which is used for balance, has only a thin covering of hair as it is the main peripheral organ of heat loss in thermoregulation along with — to a lesser extent — the hairless parts of the paws and ears. Blood flow to the tail can be precisely controlled in response to changes in ambient temperature using a system of arteriovenous anastomoses to increase the temperature of the skin on the tail by as much as 10°C to lose body heat.  Tail length varies according to the environmental temperature of the mouse during post-natal development and so mice living in colder regions tend to have shorter tails. The tail is also used for balance when the mouse is climbing or running, or as a base when the animal stands on its hind legs (a behaviour known as "tripoding"), and to convey information about the dominance status of an individual in encounters with other mice. 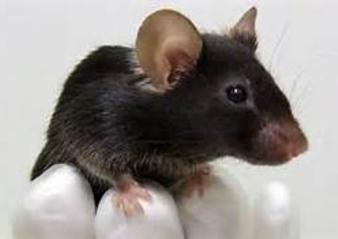 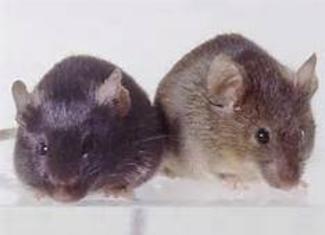