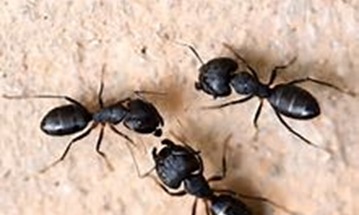 ~Carpenter ants are under the Scientific classification Kingdom: Animalia Phylum: Arthropoda Class: Insecta Order: Hymenoptera Family: Formicidae Subfamily: Formicinae Tribe: Camponotini Genus: Camponotus Mayr, 1861 Type species Formica ligniperda Latreille, 1802 Diversity > 1,000 species Carpenter ants are large (.25 to 1 in or 0.64 to 2.5 cm) ants indigenous to many parts of the world. They prefer dead, damp wood in which to build nests. They do not consume it, however, unlike termites. Sometimes carpenter ants will hollow out sections of trees. The most likely species to be infesting a house in the United States is the black carpenter ant (Camponotus pennsylvanicus). However, there are over a thousand other species in the genus Camponotus.

~Habitat- Carpenter ant species reside both outdoors and indoors in moist, decaying or hollow wood. They cut "galleries" into the wood grain to provide passageways for movement from section to section of the nest. Certain parts of a house, such as around and under windows, roof eaves, decks and porches, are more likely to be infested by Carpenter Ants because these areas are most vulnerable to moisture. Carpenter ants have been known to construct extensive underground tunneling systems. These systems often lead to and end at some food source – often aphid colonies, where the ants extract and feed on honeydew. These tunneling systems also often exist in trees. The colonies typically include a central "parent" colony surrounded and supplemented by smaller satellite colonies. Food Carpenter ants are foragers that typically eat parts of other dead insects or substances derived from other insects. Common foods for them include insect parts, "honey dew" produced by aphids, or some secretions from plants. Carpenter ants can increase the survivability of aphids when they attend to them. They attend to any aphid species but can also express preference for specific ones. Most species of carpenter ants will forage at night. When foraging, they usually collect and consume dead insects. Some species collect live insects, but this tends to be less common. When they discover a dead insect, workers surround it and extract its bodily fluids to be carried back to the nest. The remaining chitin-based shell is left behind. Occasionally, the ants bring the chitinous head of the insect back to the nest, where they also extract its inner tissue. The ants can forage individually or in small or large groups, though they often opt to do so individually. Different colonies in close proximity may have overlapping foraging regions, though they typically do not assist each other in foraging. Their main food sources normally include proteins and carbohydrates. When workers find food sources, they communicate this information with the rest of the nest. They use biochemical pheromones to mark the shortest path that can be taken from the nest to the source. When a sizable number of workers follows this trail, the strength of the cue increases and a foraging trail is established. This ends when the food source is depleted. Foraging trails can either be underground or above ground.  Although carpenter ants do not tend to be extremely aggressive, they have developed mechanisms to maximize their provision from a food source when that same food source is visited by a competing organism. This is accomplished in different ways. Sometimes they will colonize an area near a relatively static food supply. More often, they will develop a systemic way to visit the food source with alternating trips by different individual ants or groups. This allows them to decrease the gains of intruders because the intruders will tend to visit in a scattered, random, and unorganized manner. The ants however, visit the sources systematically such that they lower the mean standing crop. They tend to visit more resource-dense food areas in an attempt to minimize resource availability for others. That is, the more systematic the foraging behavior of the ants, the more random that of its competitors. Contrary to popular belief, carpenter ants do not actually eat wood because they are unable to digest cellulose. They only create tunnels and nests within it. 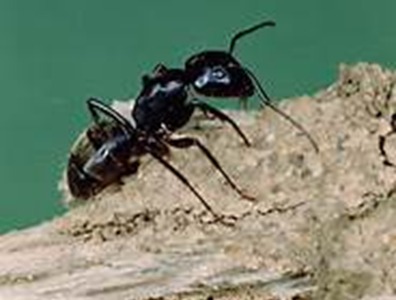